some exhibitions I curated

The colourful pieces of Belgian artist Sofi van Saltbommel (°1973, Brussels) radiate a profound ambiguity: between sculpture, ceramics and fashion, between art and crafts, between seriousness and drollness and between wildness and refinement. By integrating apparently banal objects such as fake fur, wool leftovers or plastic dolls in her creations she shakes up conventions of low and high culture. As the matter is never completely overruled by the shape, the paper clay pieces address to our sub consciousness and invite us to freely make associations.

Just like carnival the art of Sofi van Saltbommel gives us the opportunity to abandon the well-trodden path of rationality, in order to liberate our imagination and animal instincts. It is an invitation to unchain our human soul, experiment and embrace diversity. In this sense the work of Van Saltbommel perfectly fits the context of today’s globalised world and a multicultural city like her hometown Brussels, which played a major role in the surrealist movement. In order to find out what we can be or cannot be, Van Saltbommel addresses the depths of our society and our human condition, like a contemporary, female version of the world-renowned Belgian painter James Ensor (1860-1949). 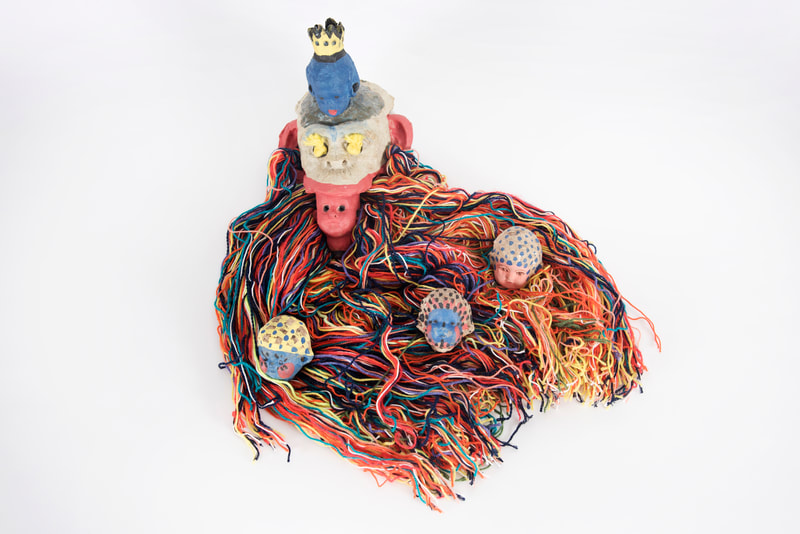 ﻿In the north of Brazil there’s a world that goes beyond our imagination. It’s a colourful world where the sun always shines, and where you can find exotic fruits and wild animals in abundance. This sensual setting of the Delta do Parnaíba is where Joias matured.

Amongst all the jewels this region has to offer, the Carnaúba palm is the one that shines most. With its elegant-dancing leaves it radiates pure natural glamour. Besides being beautiful, the Carnaúba is environmentally and economically vital for the region. Every single part of this tree is used for the most diverse products, from construction materials to computer chips, and from medicine to artisanal objects. It is not by chance that the Carnaúba is called ‘árvore da vida’.

Our ‘joias’ are the fruit of a co-creation process between the artisans of Ilha Grande de Santa Isabel and three Belgian designers. They are inspired by this overwhelming environment, and they are made out of the sun-dried fibres of the Carnaúba tree. In the objects the artistic concepts of the designers beautifully merge with the diverse craft techniques of the Brazilian artisans. Joias is a silent witness of this exuberant cultural dialogue. 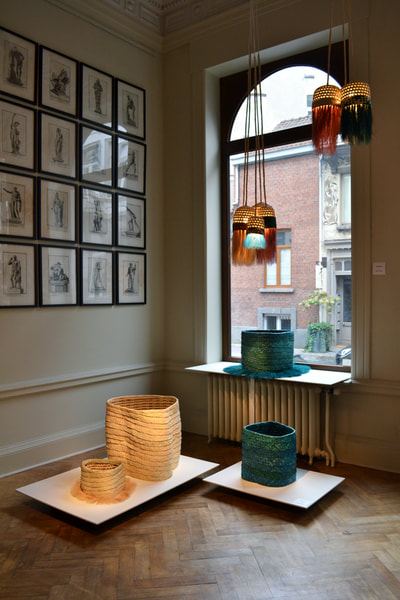 “In the near future
I will realize my dream
And in the book of this valley
another history will be.”
--- Deuzani Gomes Dos Santos

Caro Barro is the result of a cocreation process between the Belgian designer Sep Verboom and the Brazilian artisans of Coqueiro Campo, a village in the Valley of Jequitinhonha, in the north of Minas Gerais. Following centuries of tradition, the woman of the community still produces artisanal ceramics that are completely made out of natural materials. In close collaboration with the Brazilian organisation Artesol we invited Sep and his brand Livable, which is specialized in working with artisans all over the world, to live and work with the artisans for one month.

Caro Barro mixes the artistic language of the artisans with elements from the village such as roof plates that inspired Sep Verboom to tell the story of the valley, and the way in which huge plantations of eucalyptus invaded in the lives of the artisans. Not only the companies bought all the land from the local people for low prices, but because the eucalyptus trees take all of the water from the ground, the nature of the valley is irreversibly damaged. That’s why the ceramics today are an even more important source of income for the people of Coqueiro Campo. Luckily one of the few things they can still get from nature, is the clay. Their sweetest, most precious clay. With the exhibition Fragilidade forte we’re responding to the global revival of the traditional/artisanal knowledge and crafts, with which designers create new, contemporary objects. While the Modernists thought of crafts as stuffy and anachronistic, the public showed a renewed interest during the last years.

Not only in the field of design, but also for example in gastronomy – with the microbreweries or sale of homemade cakes – the crafts are becoming more popular. In this digital, more and more globalized and therefore often impersonal world people are looking/searching for authenticy. For objects with a soul.

The work of the two Belgian designers we present, Piet Stockmans and Klaar Prims, fits perfectly in this trend. Besides their common passion for savoir-faire, the artisanal and technical perfection their objects have a contemporary and at the same time timeless design in common. Although humans already cultivate natural materials as glass and ceramics for ages, designers as Stockmans and Prims show that these materials are still relevant today.

In their unique, handmade pieces the designers drive the experiment to the extreme. Klaar Prims developed a technique to create ultra thin strings out of glass, which resulted in the bowl 8ung!. And Piet Stockmans became world famous with his ultra thin walls of his vases in white and blue, whereby the porselain becomes transparant.

Each of them developed techniques to transform the liquid mass in a strong object, and to bend lightness into complex simplicity. All of the pieces are pure objects that look at first sight very fragile, but aren’t really at the same time. These aspects make them probably as fascinating as they are.

Além do modernismo - Beyond Modernism (2014)

While the globalisation is offering a lot of opportunities, it poses new challenges and problems that require new ways of thinking. We present in the exhibition ‘Beyond modernism’ a selection of three designers who think out-of-the box and who are radically looking for new solutions.

Carl De Smet with Noumenon wants to offer an affordable and sustainable alternative to modular furniture. Thanks to the use of a specially developed material the size of the pieces can be minimized during transport and packaging is unnecessary. In addition, thanks to the use of the bone structure, the chair is particularly strong and undestroyable, because the material can always recover itself and re-take its original form over and over again.

In addition, the work of Peter Donders examines and drives to the extreme consequences the potential of the carbon fiber, that is currently very sought-after. Thanks to Donders' technique, it is perfectly possible to manufacture prefabricated balconies without the requirement of using a reinforcement or a concrete construction. Such a prefabricated balcony would weight just 20 kilograms instead of 500 kilograms like traditional structures. At the same time the former would be more resistant than the latter. In addition, it would allow contractors to produce the pieces in advance and it would simplify the installation on buildings.

For their metamorphosing designs Kinetura developed a composite material that allows lamps, installations and buildings to react to the environment and to people. If someone walks by the New York, the lamp feels it and it slowly opens. The same proactive reaction to shoppers applies to the Kinestore, that will automatically show products based on the customers’ taste and preferences. Despite their tight design, which is based on the modernists’ form follows function principle, Kinetura’s products and concepts have a natural, almost human, character thanks to their shape-changing ability.

The ideas and creations that we present were considered as pure design fiction until a recent past. Despite that they are strongly forged by technology, their organic forms and principles are closely related to the nature. The selected designers open new dimensions in the world of architecture and design, and come up with solutions for some of the contemporary energy and environmental issues. They carry a universal message to the citizens of all countries and they call them to their collective responsibility to keep our planet a liveable place.

With this common goal in mind they propose a new form of progress that is aimed to shape and improve the social reality and where the functionality prevails. In this way they further develop the core ideas of the Modernists.

As in the past, surrealism still characterizes the Belgian identity. In the tradition inspired by the world-famous Belgian artist René Magritte’s work Ceci n'est pas, the designers in this exhibition play with the way the spectator perceives their objects. Bram Boo’s Gypsy Things chairs seem to come to life due to their uncommon forms and what at first sight may appear to be a pile of colorful suitcases is, in the world of Maarten de Ceulaer, a wardrobe.

In their creations these three designers turn conventional wisdom on its head, with regards to the titles and the objects themselves, as well as the materials they use. Maarten de Ceulaer is able to create a high-quality, exclusive product with simple, commonplace materials such as plaster and balloons. Nothing is what it appears to be and humor is always around the corner.

All three designers want to tell a story and inspire emotion in the viewer. With some this happens more literally than with others. Maarten de Ceulaer’s Pile of Suitcases narrates colonial history while Raphaël Charles engages, through his works, with several episodes in the history of Belgium. His Les cheminées echoes the past industrial power of the country, the tapestry 20/30 is a nod to the once glorious Belgian mines, while Multiple is a clear reference to the current political situation – thanks to the separate, magnetic wooden elements one can easily give Belgium the shape one prefers.

Aside from their differences, all the objects exhibited have something in common. They are all more than merely objects and they have, as mentioned, a much deeper meaning. That’s why these products invite us to reflect on their functionality. They all leave the viewer the choice whether to use them or rather treat them as artworks. Familiar objects are imbued with a new, poetic meaning and become – just like Magritte’s pipe and apple – mysterious.
Powered by